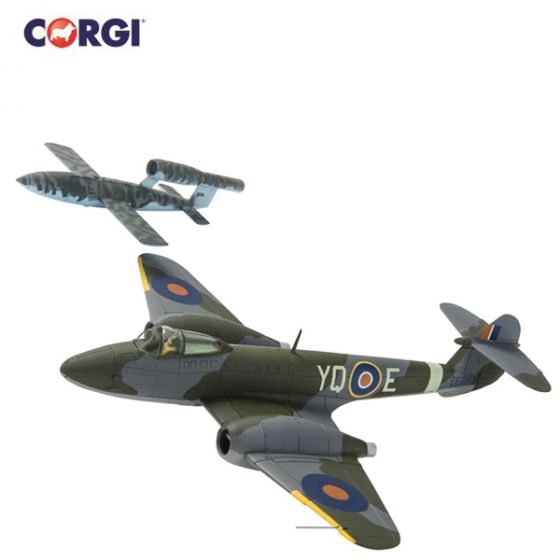 Under the cloak of extreme secrecy, Britain had been testing the viability of a jet-powered fighter since early 1941, with the Gloster E28/89 Pioneer proving that this was indeed possible.  The race was now on to produce an effective, operational jet fighter, at a time when every available resource was required for the war effort and experimental technology was a luxury that often proved to be more of a distraction.  Work continued apace and the twin engined Gloster Meteor neared a test flight.

This work was so highly classified, that any test flight required the roads around the airfield to be sealed off by the local constabulary and all residents ushered away from the immediate vicinity.  All non-essential personnel were forced to leave the airfield for the duration of the test flight, even though they would have clearly seen (and heard) the strange new aircraft once it was in the air!  Following completion of the flight and the safe recovery of the aircraft, life could get back to normal.

As the Gloster Meteor entered RAF service, it was originally charged with destroying the V-1 flying bombs that were being sent indiscriminately in the direction of southern Britain.  The first Meteor victory over a Doodlebug occurred on the 4th August 1944, when Flying Officer T.D ‘Dixie’ Dean spotted a V-1 flying in the direction of Tunbridge Wells.  Placing his Meteor EE216 in a shallow dive to build up speed, he lined up the V-1 in his gunsight and fired – after a short burst, all four guns jammed.

Dean was determined not to let the Doodlebug get away and manoeuvred his Meteor alongside the flying bomb, wing tip to wing tip.  When he was positioned as close as he safely could, he flicked the control column of his Meteor and banked sharply away – the sudden airflow disruption caused the V-1 to go out of control and crash without causing injury on open ground.  Dean had the first Meteor victory over the V-1 and was the first pilot to use the risky ‘tip and run’ tactic to destroy one these feared flying bombs.