Narrating the incredible exploits of this powerful aircraft and the men who flew it in battle, Harrier 809 tells a thrilling true story of courage and resourcefulness in the heart of the Falklands War. 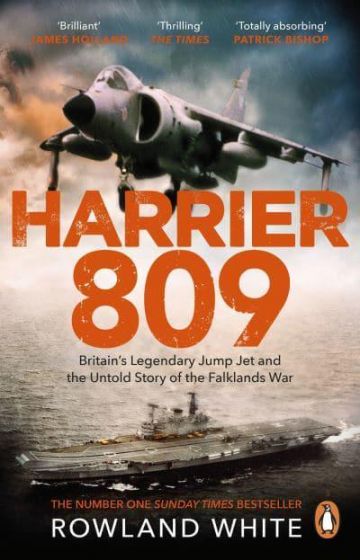 'Without the Sea Harrier there could have been no Task Force' - Admiral Sir Henry Leach, First Sea Lord and Chief of the Naval Staff

In response, Britain despatches a naval Task Force. Eight thousand miles from home, its fate hinges on just twenty Sea Harriers against the two hundred-strong might of the Argentine Air Force.

The odds against them are overwhelming.

The MoD's own estimates suggest that half the Harriers will be lost within a week. Against this background, 809 Naval Air Squadron is reformed, trained and sent south to fight.

Not since WWII had so much been expected of such a small band of pilots.

Combining groundbreaking research with the pace of a thriller, Rowland White reveals the full story of the fleet's knife-edge fight for survival for the first time, and shows how the little jump jet went from airshow novelty to sealing its reputation as an icon of British aviation, alongside the Spitfire and the Hurricane.

Product Code: 11090
More Information
Reviews
Write Your Own Review
Only registered users can write reviews. Please Sign in or create an account